Home
What is it
How it works
Gallery
News
Info 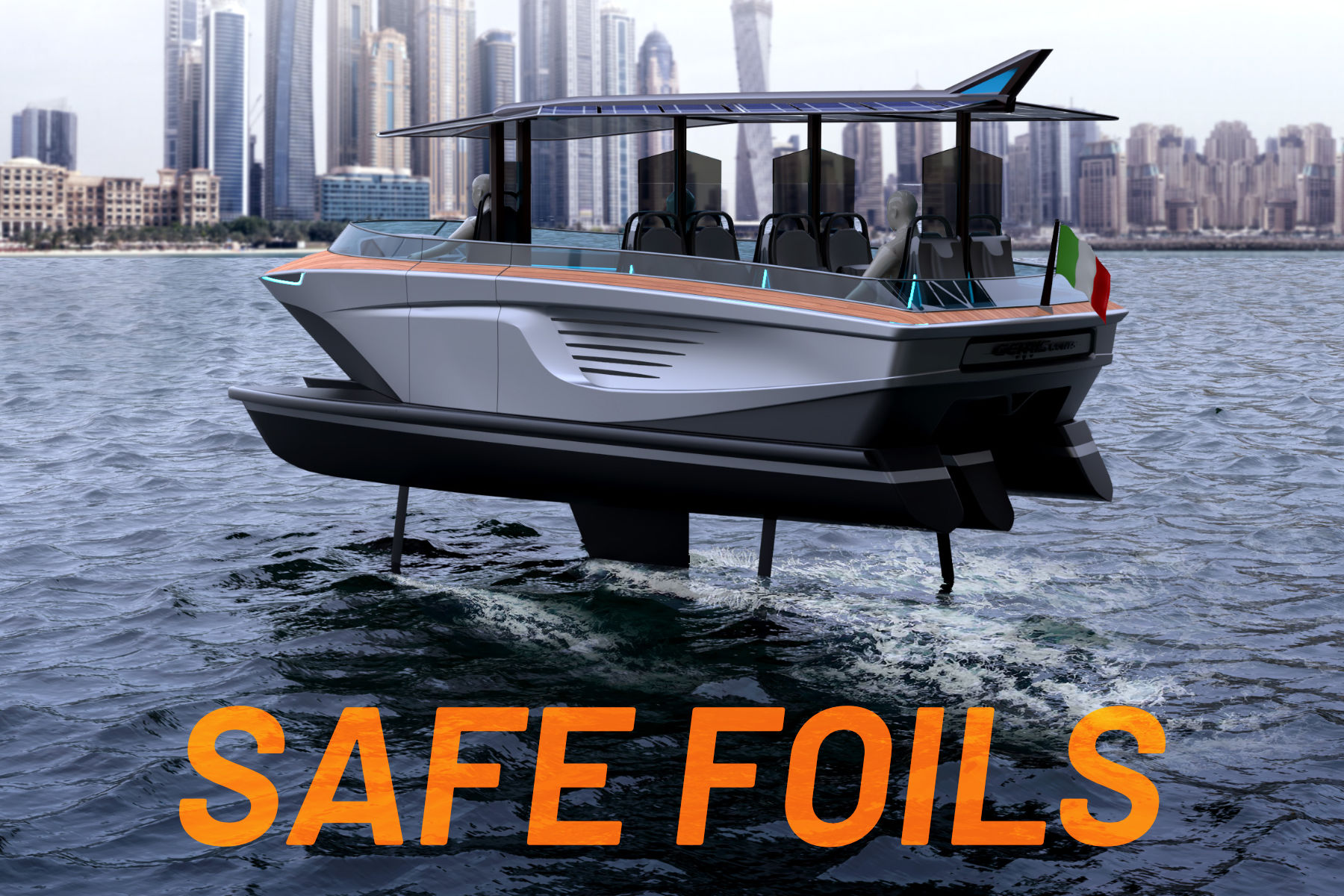 Foils, in recent years, have risen to become a key component for boats competing in nautical competitions. A perfect example being their use during the races run by Luna Rossa in the America’s Cup. A technology that minimises the hull’s drag in the water, resulting in increased speed and reduced energy consumption.

Just like an aeroplane, to be able to “fly” a boat needs a good take off speed and to electronically control its attitude, which has to be achieved even more efficiently than it does on a plane.

Once flying, a boat with immersed foils is normally unstable, just like Columbus’ egg standing on its tip in the apocryphal story: today the problem is solved by keeping it vertical through electronically controlling the foils.

It’s therefore a great piece of technology for sporting applications. However, if it’s to be used for public transport, other aspects need to be taken into consideration: the risk to passengers in case of a malfunction, of a violent landing on the water.

The Gerrisboats design has taken this issue into consideration, and it can be considered a “safe foiling” vehicle.

The boat, developed as a high-tech, super-efficient electric water taxi for transporting passengers around cities of water, resolved the critical issue of safe foiling in two ways.

Firstly, unlike racing boats, which when they lift up onto the foils are completely above the water, for Gerrisboats a significant proportion of the vessel remains submerged. This is the torpedo-like structure, which houses the batteries for the engine as well as the entire propulsion system, a unique element of Gerrisboats: thanks to its positioning it requires less thrust, which in turn means the take off and flying speeds are lower compared to other “foiling” hulls.

In physics, the energy to be dissipated in an impact is given by the square of the speed. If it’s possible to fly efficiently at 10 knots rather than 20, i.e. half the speed, during a splashdown only a fourth of the energy needs to be dissipated with respect to the higher speed, meaning less deceleration for the passengers.

The second advantage of safe foiling are the small side hulls. Not only do they contribute to decreasing wave generation and drag at low speed, but when flying they are also kept close to the surface of the water and, if there’s a malfunction, their tapered shape enables them to act as a soft cushion for landing on.

In other words, the small mobile side hulls are a kind of emergency hull for “soft landing” should the need arise, explains Massimo Verme, founder of Gerrisboats – “by keeping them close to the water, no matter what happens, the boat can land on them, thus ensuring there’s no danger for the passengers”.

“Being able to take off at only 8 knots” he continues, “as well as solving the problem of using foils in cities where speed limits are low, also guarantees a higher level of safety”.